Last Saturday was, for the time of the year, an ideal day for getting about, and accordingly I thought. I could not do better than take advantage of it to have a stroll round the countryside. Knowing that the place possessed an interesting little church which was undergoing repair, I made my way to Ilmer. I had never been there before, and consequently had only a vague idea of what the spot was like but a gentleman on his bicycle who passed me on the road at Longwick, learning whither I was directing my steps, sped on his way with the remark, “Well, I wish you joy.” He had evidently been there himself. Ilmer may be described as an out-of-the-world place, or as a place at the end of the world. When you arrive there you seem to come suddenly to a full stop. Beside the road by which you reach your destination you find there are two other roads - one to the right, which, according to the information given me by a rustic “didn’t go nowhere ‘cept up to Mr. X’s medders;” and one straight on, a dirty miry lane, full of rucks and puddles, which leads to Coldharbour, a hamlet containing one house, but bearing a curious shivery sort of a name, but interesting nevertheless.

Now a word or two about the name of this secluded spot. Like other local names it had been variously written, but the choice seems to lie about even, between Ilmire and Ilmer, and a visitor has a perfect right to choose whichever form of the word he may fancy, for he will find there plenty of mireland and several diminutive meres; but he will look in vain for that ancient eel which is said to have given the name of place its initial syllable. Our forefathers evinced a peculiar fondness for deriving the names of places where they settled from their natural features, and in this respect Ilmer was particularly well named, whether we adopt the “mere” or the “mire” origin. The village is a very small one, and the few houses it possesses are clustered round the church.

The Church, dedicated to St. Peter, stands on a circular mound, whether natural or not is a point I cannot decide; but it is, apparently, to a certain extent artificial. The churchyard is entered on the east by a little swing gate, and just inside on the left is a venerable rugged elm of considerable girth. This is, I believe, the only churchyard I have ever visited - and I have been in to some hundreds, perhaps - in which there are “no frail memorials” erected to the departed forefathers of the hamlet. There are a few graves noticable “where heaves the turf” in mouldering heaps; but there are no tombstones, grave-rails, or anything else to perpetuate the memory of those who sleep there, “each in his narrow cell,” beneath the sod. I am not quite certain, because I did not make a note upon the point, but as far as my recollection serves me, I do not think there are any mural tablets or monuments within the church. The population of the parish is small, only a few score all told, and interments no doubt are not frequent, but still after making all due allowance for that circumstance, it seems rather strange there are no memorials of any kind either inside or outside the church.

The Church is a very small building, but, doubtless, it has always been able to afford sufficient accommodation for the corresponding small number of parishioners. It consists of a little north porch, a nave, and chancel, with a western tower, now undergoing repair, erected within the west end of the nave, and not as usual forming an appendage outside the nave. The Church bears evidence of having been originally a Norman edifice, although very little is now left of that early building. It has some Early English features, but as it no stands is mainly of the Decorated Gothic or Second Pointed style, dating from somewhere about 1340. The exterior of the south wall of the nave exhibits some very interesting features, which really deserve a more minute examination that I had time to bestow upon them. There is a round-headed doorway, perhaps a portion of the Norman edifice, which has been built up. Near by, but a little to the eastward, is a curiously constructed window, apparently inserted in the upper portion of another doorway, for there is evidence in the masonry of the walling of its having been carried down to the foundation. In 1662, a licence was granted to take down an aisle or vestry on one side, and to use the materials in repairing the other parts of the Church. Perhaps this vestry, or whatever it was, stood here, and the opening which led to it from the nave is indicated by the present window and the filled-in walling below. 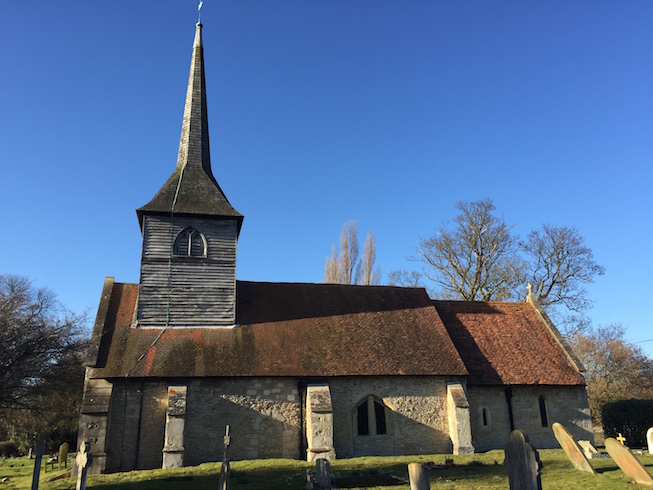 The only entrance to the Church now is on the north side by a door under the porch, which has a cross on the gable. There is also a cross on the gable over the east window. Finding the door open I entered the Church, and I must say, took rather a fancy to the interior, which reminded me somewhat of Little Kimble Church. Just opposite the door stands and octagonal 14th century font, and to the right may be seen the ropes of the three bells hanging in the tower. The nave is seated with open benches, the faldstool is of oak, ornamented with fleur-de-lys, the lectern of a similar material is like that in Eton College Chapel, and the pulpit in the north-east angle of the nave is also of oak, standing on a stone pediment. 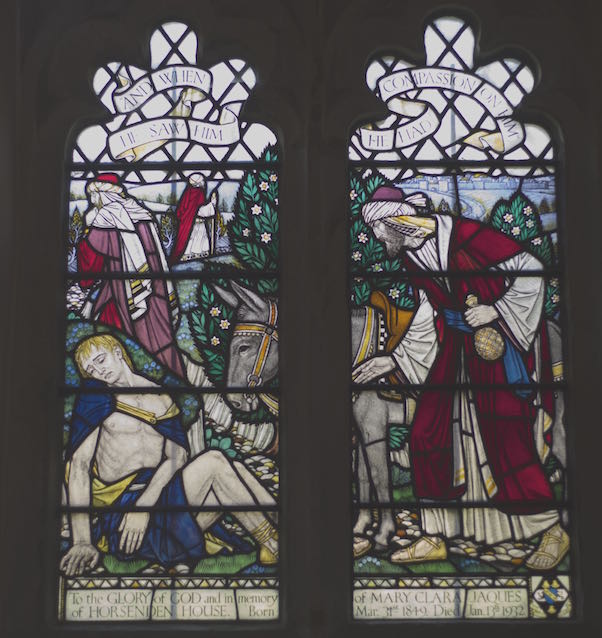 This is the most interesting part of the church, and retains some of its ancient features. It is entered from the nave under a Decorated oak screen, on a stone base, of a somewhat curious design. The floor is paved with encaustic tiles, the reredos is of stone inlaid with porphyxy and marble, and on the retable are the usual ornaments - a cross and the two Altar Lights. On the south side is a small Decorated placina. But what interested me most was two curious sculptures in the lower part of the westernmost window on the north side. One represents the crucifixion. The body of our Lord is somewhat mutilated, and on each side of the cross stands a figure. Above the cross a circular cutting in the stone-work represents clouds out of which appears the figure of God the Father, with both hands raised, while higher still to the left is the Holy Dove. The nimbus and rays of glory around the heads are still very distinct. On the opposite side of the window is another scene, apparently St. Christopher bearing the infant Christ across the stream, a favourite subject with mediæval artists for portrayal both in fresco and sculpture.

When the late vicar, the Rev. W. E. Partridge, was presented to the living, in 1834, he found the church in a dilapidated condition. In 1858 he purchased the advowson, and thus became patron of the benefice. Soon after this he commenced the very needful work of restoration which was carried out under the direction of our Bucks architect, George Edmund Street. The Church was re-opened on August 30th 1860, when the sermon was preached by the Bishop of Oxford. It appears that Mr. Partidge intended to restore the belfry, but from some cause he did not carry out his design. That portion of the work is, however, now being done by the present vicar, who is also rector of Horsenden, where he resides. The stonework of the tower had been taken down when I saw it on Saturday; but, as I have seen it described as ugly, unsightly, and dilapidated, there can be no doubt that its restoration was absolutely necessary. When it is completed Ilmer folks will possess one of the nicest little churches in the county.

The manor-house stands back from the road a little distance eastward from the church, and is a large edifice constructed of brick and timber. The manor was formerly held by one of those curious tenures we occasionally meet with during the middle ages; the service in this instance was being Marshall of the King’s hawks and falcons. In the 17th century Lord Dormer, of Wing, because he held this manor was Master Falconer to the King.

TO THE EDITOR OF THE BUCKS HERALD.

SIR,-Thanks to Mr. Loosley and “a Bucks lady” for their interesting notes about Ilmer. But the lane “Sigma” means, I think, must be one leading from the church to Towersey, and thence to Thame, known as Burnways, which must be one of the oldest byways in Bucks, has been used a lot in former times. Perhaps you would like a bit of the history of this old crooked lane, leading by that shivery place called Cold Harbour - a farm all grass land, and which has been in one family something like 400 years. The grand-father of the gentleman who occupies it now used to be a cow doctor and made “mad drinks.” Any one bitten by a mad dog who took one of his drinks did not find any more of it. People used to go for miles round after these drinks, and gave them to cattle as well. I have heard say that they would not sell the receipt for £50. It was the only place in England where one could buy mad drinks like them. The old house was burnt down a few years ago, and all the old receipts dating back some hundreds of years, were destroyed. The roof being of thatch, there was no chance of getting them out. Now, going back to Burnway-lane, when you reach the brook where a water-mill once stood, the landmarks are still traceable in a piece called Mill-piece and Mill Leys. Old men say there used to be different things dug up in Burnway-lane which had been buried by soldiers in former times. Not far form Cold Harbour is a field called Bonehook, and another called Catcham field, so it appears Burnway-lane has been used more in former times. I can remember when people used to go through to Towersey with a horse and cart, over Saddles Field, to Towersey-lane, now stopped, against the ford over the brook, with a bridle gate.